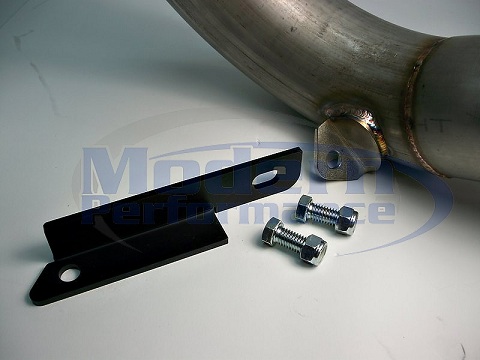 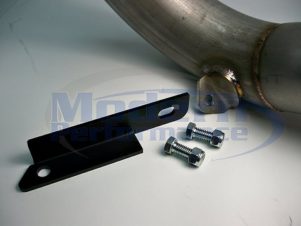 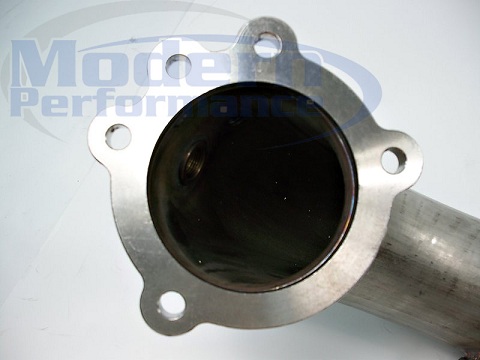 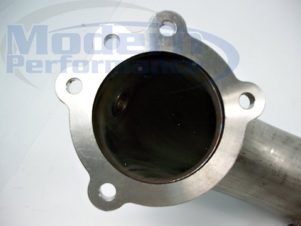 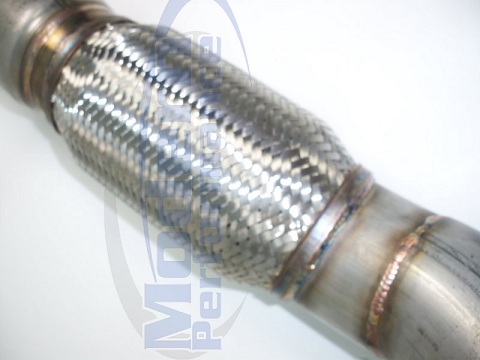 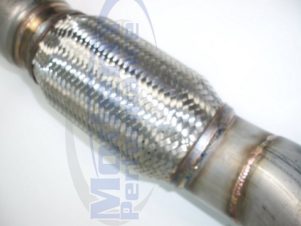 This downpipe is the version WITH a catalytic convertor.

Modern Performance first tested out the MPx downpipes way back in late December of 2007, and we were amazed at the power we gained with replacing the factory downpipe. Because of the factory downpipes design in having a precatalytic convertor, and a secondary catalytic convertor, exhaust gases coming out of the engine were slowed, and there was a lot of exhaust restriction.

The Turbo
spools so much faster, that acceleration across the board is increased remarkably, and low rpm torque is increased by as much as 34 lbs of torque at the WHEELS !

We utilize nothing but high grade stainless steel in the construction of the MPx downpipe. We start by cutting stainless steel flanges to mount onto the turbo for maximum strength. Then, we use 3.5 inch piping that goes to 3 inch piping. We use a triple layer stainless steel mesh flex joint to allow engine movement. Lastly, we use a heavy duty steel reinforcement bracket to support the exhaust to the engine, just like the factory downpipe. This helps relieve some of the stress of engine movement on the downpipe.

Our downpipes are made by a team of exhaust fabricators that have over 130
years of combined experience. The downpipes are made in batches of 100 at a
time and are fully mig welded with jigs. These are high volume, extremely high
quality production pieces.

Additional Features of the Downpipe

MPx downpipes feature a number of features that make other downpipes poor in comparison. For example, the downpipes offer a bung for a air/fuel mixture ratio meter, and a bung for an exhaust gas temperature should you want to monitor your cars EGT’s. No other downpipe offers both of these benefits.

MPx downpipes fit perfectly with the factory exhaust, and require NO cutting, no
welding, no special tools to install.
Our 02 housing/downpipe weighs in at 9 lbs, which is a solid 10 lbs lighter
than the factory 02 housing and downpipe!

NOTE: This exhaust may not be legal for sale or use on pollution controlled motor vehicles. Check local and state laws before purchasing.